On the 35th anniversary of the death of Primo Levi and commemorating the 75 years of the publication If this is a man, a collection of personal portraits and fragments from his literary production preside over the central space in El born CCM with the aim of making us reflect on humans’ need to bear witness to history.

Through his writing, Primo Levi gave a fundamental witness on the Jews’ experience of being deported to Nazi concentration camps. His leading role in testimonial literature is not limited to the literary quality of his work, but also to the fact of constituting true knowledge about the testimony itself. Levi’s work allows us to access the way a testimony is constructed throughout the journey through a life, the paradoxes, and difficulties in conveying experience in both time and in different generations. Yet, we can’t help but read his testimonial work with the backdrop of his suicide in mind.

Furthermore, his profession as a chemist plays a very important role in Levi’s life and his survival. His profession was beneficial to him within the structure of Auschwitz-Birkenau and also when it came to applying a scientist’s tools: the distance that makes observation possible and later, through writing, reflection and analysis.

The “Lo sono un centauro…” (I am a Centaur) installation aims to make the character known in his role as a witness, fiction writer and chemist, focusing particularly on his international validity and not forgetting the importance of climbing throughout his life.

The installation consists of five multi-dimensional photographs of Primo Levi and five short texts extracted from the Periodic Table along with the “lo sono un centauro…” interview which hang from the central part of the El Born CCM’s ceiling. It can be visited from 27 April to 26 June, a time when a wide programme of events will be held in tribute to the author in which concerts, recitals, conferences, projections and round-table discussions with experts will be held. 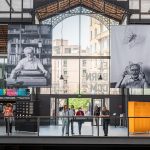 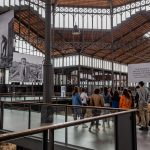 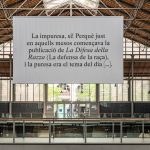 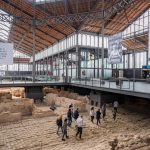 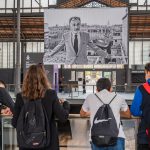 Piano concert and recital of fragments of Primo Levi’s works